Can a grieving alien warrior and a desperate mother overcome their painful pasts through the shared love of a child?

One year ago, Jade’s husband was killed and the baby she had wanted for so long disappeared. She has been searching for her daughter ever since. Nothing – not even being abducted by aliens – is going to stop her.

She doesn’t expect to find a daughter who doesn’t know her; one who clings to a huge, green alien instead. Despite her own attraction to the older warrior, she will do whatever it takes to get her daughter back.

Inzen lost his wife and daughter many years ago in the terrible plague that threatened to destroy the Cire race. When his ship rescued a group of abducted women and infants, he willingly took on the care of one of the children.

Then a luscious human female appears, demanding the return of her daughter and he is faced with once again losing a child.

When danger threatens, can Jade and Inzen come together for the sake of the child they both love?

Each book in the Treasured by the Alien series can be read as a standalone romance. This sweet and steamy HEA is intended for mature readers.

Purchase on Amazon or FREE on KU 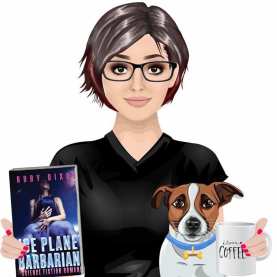 Jade’s baby girl disappeared a year ago and she is on a mission to find her. Little did she know that her sweet baby was abducted by aliens! So Jade gets taken by the very same aliens and we see our old buddy Kwaret coming to her aid. Meanwhile, Inzen adopted a sweet baby girl with no mother. (Reference previous books in the series.) He lost his family years ago and he jumps at the chance to be a father again. When he hears there’s a mother searching for her little girl, he has to go to her. He doesn’t want to lose his daughter and he has to know his fate. I absolutely loved Inzen’s reaction to Jade when he meets her, and his wandering tail! And hey, I’m giving a shout out to Chapter 11! (Don’t miss it if you like your books hot!) When Jade sees her daughter, Lily, again for the first time it’s heartbreaking. Lily doesn’t recogize her mama. In order to find out what happens from there you’ll have to read the book!

This book was just amazing! Several times I wanted to run off with Inzen just for his tail… The level of heat and the sweetness in this book are just beyond compare. And there’s some fun stuff near the end. Can I just say that I want to crawl into this romance and live in that happy & steamy place? The Treasured by the Alien series just keeps getting better! Honey and Bex created the perfect sci-fi romance with this one! 5++ stars!

If you’d like to be notified of teasers, updates, and promotions, subscribe to Honey’s newsletter here: https://tinyurl.com/y83cyvtn

Honey wrote and illustrated her first book at the tender age of 5. Her writing has improved since then. Her drawing skills, unfortunately, have not. She loves writing, reading, traveling, cooking, and drinking champagne – not necessarily in that order.

Her steamy science fiction stories focus on hot alien warriors and the Earth women they can’t resist. From abductions to invasions, the ride might be rough, but the end always satisfies.

So, thank you so very much, to all those authors who love to mix bodice ripping with hunky, otherworldly men. You’ve changed her life for the better.

Wife and mother, she is so damn grateful to be living her dream.