A gruff older warrior. A hopeful young cyborg. A frightened woman on the run.

J-817 would never forgive himself for the terrible mistake he had made – a mistake which resulted not only in his conversion to a cyborg but caused the same fate for his young private. Determined to atone for his failings, he protects B-669 during the long hard years terraforming Mars and even agrees to try his hand at mining the new planet.

Frantic to get away from Earth, Daisy seizes the opportunity to become part of the Martian mail order bride program, even though it means a dangerous new planet and an unknown husband. She doesn’t expect to find herself married by proxy to a stern older cyborg who refuses to let her close to him, but whose intense gaze creates a storm of longing inside her. And his young partner is just as attractive.

B-669 owes everything to J-817, but the other male is too buried in guilt to accept his gratitude. In an attempt to overcome the trauma of the past, B-669 arranges for a bride for J-817. Despite J-817’s original rejection of the delicate little human, B-669 can see the longing in his eyes when he watches Daisy. It’s just a matter of time before he succumbs. The only problem is, B-669 wants her just as much.

When danger threatens, can they overcome their past fears and learn to live – and love – together in this harsh new world?

**Each book in the Cyborg on Mars series can be enjoyed as a standalone romance. This sweet and steamy science fiction romance is intended for mature readers. 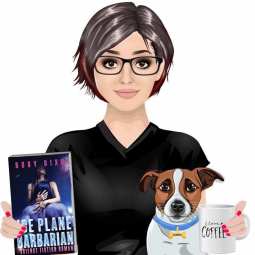 Daisy traveled several months to Mars to leave behind a nightmare. Married to a man on paper and sight unseen, she arrives on Mars. Daisy is small, afraid, and harboring a secret. Once arriving at her new homestead, she finds she’s married to a huge and gruff, older cyborg! Jonah is blindsided by this marriage that his long-time friend, Billy, has arranged. But Daisy finds herself attracted to both men. Jonah is protective and commanding which makes her feel safe. Billy is affectionate and kind which makes Daisy feel loved. This makes for a steamy story between the trio. I love them together. Billy is hoping that Daisy can heal Jonah’s broken soul over time. Unfortunately, Daisy’s past catches up with her. You will hate Richard. He’s a special kind of evil. There’s some fun twists and turns in this book!

A Few Cyborgs More gives us an additional view of the Mars colony and landscape. You will fall in love with Jonah and Billy just like Daisy did. Fabulous addition to the series! 4 stars

There are MORE more books in this series!

If you’d like to be notified of teasers, updates, and promotions, subscribe to Honey’s newsletter here: https://tinyurl.com/y83cyvtn

Honey wrote and illustrated her first book at the tender age of 5. Her writing has improved since then. Her drawing skills, unfortunately, have not. She loves writing, reading, traveling, cooking, and drinking champagne – not necessarily in that order.

Her steamy science fiction stories focus on hot alien warriors and the Earth women they can’t resist. From abductions to invasions, the ride might be rough, but the end always satisfies.